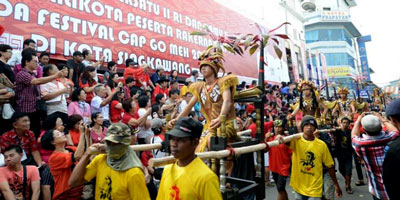 It is known fact that Singkawang City has a significant Chinese culture. No wonder, tourists may find some oriental traditions especially Cap Go Meh. This also explains why many outsiders come to Singkawang at the 15th day of the Chinese’s New Year (Imlek). It is because they want to feel the merriment and watch the ceremony directly. Therefore, those who come to Singkawang should not miss the chance to join the event when coming to the region at such specified time. Tourists are even allowed to participate and get a more excitement!

The Nuance
When it comes to nuance, Singkawang City indeed has a jaw-dropping Cap Go Meh Festival. It is because the local government and citizens work together to create an unforgettable event for everyone. For instance, there are dragon replicas and barongsai as the major features of the ceremony. The next noticeable feature is none other than the Chinese gate, having the height of about 6 meters and the width of about 16 meters! Not to mention the gate comes with the Chinese Zodiacs called Shio. During the ceremony, people wear traditional attire and makeup. They gather at the street and perform dancing together! What a festive atmosphere!

Exploring Cap Go Meh Festival
The first allure in Singkawang’s Cap Go Meh Festival is definitely the lampions festival done at night. For the information, the locals may ignite thousands of lampions at the time. Thus, the sky looks so great beautified by those flying objects. This explains why the region has broken the national record regarding the highest number of lampions ignited during a single event. As for tourists, it gives them the chance to take wonderful photos as well.

The next reason why the festival attracts lots of people is due to its harmony. It is because people can join and watch the event regardless of their status and religion. During the parades, other tribes even participate and give a better merriment to it! This is how a unity and tolerance should work, no? Moreover, the festival consists of numerous attractions for the audience to enjoy. Thus, it is impossible for someone to get bored when watching the ceremony.

Aside from the lampions, the festival also offers other attractions especially the lion barong dance. The swift movements of the dancers may impress everyone, without a doubt. There is also an attraction called Tatung (which is done at the end of the ceremony).

How to Get There
In order to watch or join the festival, tourists should get to Singkawang City first. If they come from Pontianak City, the trip takes approximately 3 hours and 4 minutes. It is because the distance is 151 km. Here is the tip. Tourists should take Ahmad Yani Street for a faster trip. Also, they must know the exact date of the ceremony before coming to Singkawang! Otherwise, they may miss the chance to witness the festival.