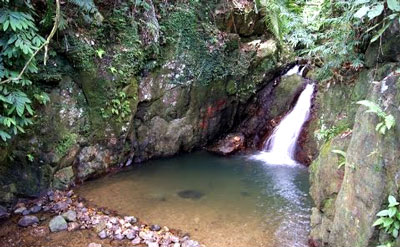 Visiting Singkawang City of West Kalimantan Province is a good idea and it gives a new experience to everyone, especially nature lovers. The fact is the region owns lots of beautiful waterfalls to explore including the one called Sibohe. It is located in Pajintan Village and resides in East Singkawang Sub-District. Despite the small size, the waterfall looks both peaceful and stunning. Not to mention the location is on a hilly area, so it offers refreshing nuance for tourists relax and eradicate stresses.

The Nuance
As mentioned before, Sibohe Waterfall has a small size so everyone is able to climb it. Below it, there is also a small pond (having the width of about 18 meters per square) with crystal clear and refreshing water! The next impressive feature is none other than the location, which is considered secluded but near to the local settlement. Also, visitors can easily find eateries near to the site! That means buying foods and drinks is quite easy there. The next thing to know is related to the nuance. It feels so peaceful and soothing due to the presence of shady and tall trees that surround the waterfall.

Exploring Sibohe Waterfall
Commonly, the locals come to Sibohe Waterfall to enjoy the refreshing nuance. As mentioned before, the waterfall resides in the midst of a forest so it comes with a refreshing and soothing atmosphere. The lush trees make it shady and comfortable, as well. Here is the tip. It is the best to come early in the morning as the air is fresher and the ambiance is more peaceful. Plus, it is recommended to come either with friends or families and enjoy a recreation together.

According to the locals, another best time to visit Sibohe Waterfall is at noon. Why is that? It is said the beam of the sunlight reflects beautifully on the surface of the natural pond. Thus, it offers a stunning scene for tourists to watch during the visit. Have no worries. The shady trees keep everyone away from the heat of the sun. Plus, tourists are allowed to take a bath in the natural pond and feel such refreshing water right away.

For those coming by private vehicle, they can take advantage of the parking area provided by the locals. It is true there is the parking fee, but it is considered cheap. From the parking lot, it takes some walk to get to the waterfall though. Instead of being a tiring trip, it gives a satisfying trekking experience to everyone. After all, such tiredness may go away instantly once tourists arrive at the waterfall!

How to Get There
The distance between Pontianak City and Sibohe Waterfall is 164 km. That means the trip may take approximately 3 hours and 26 minutes. Tourists only need to get to Singkawang City through Ahmad Yani Street. Next, they can get to East Singkawang Sub-District and head to Pajintan Village right away.